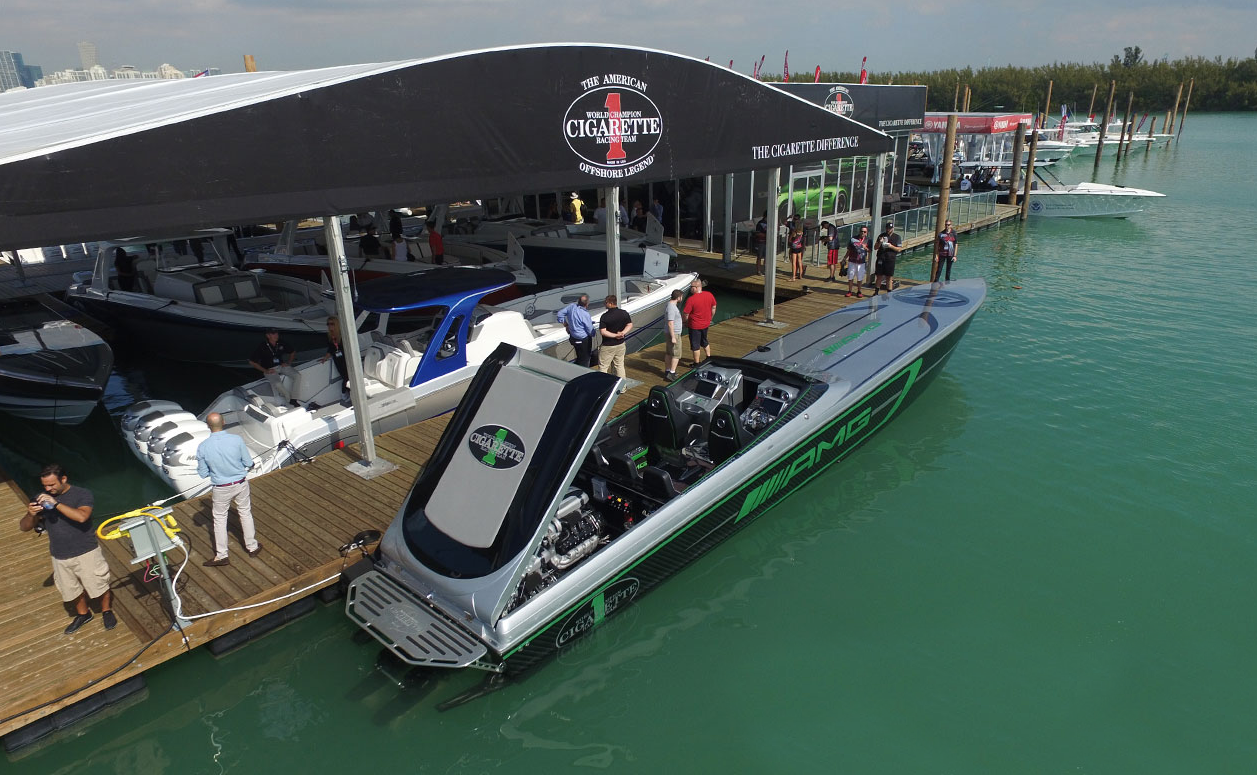 When the Miami International Boat Show invades the Sunshine State Feb. 13-17, the in-water docks at the Miami Marine Stadium Park & Basin on Virginia Key will be robust with big-muscle machinery. Powerboat Nation asked many of the high-performance exhibitors which models they plan to show off at the 2020 edition of the show. Here’s what they told us.

The Opa-Locka, FL, builder of go-fast vee hulls is notoriously tight-lipped about its big reveals, but usually has some astounding surprises—including at least one head-turning theme boat—ready for Miami. Expect Cigarette Racing to have at least one of each of its models on display, including a Top Gun, 42X, Marauder, GTS, GTO, Huntress and the super-sized 59’ Tirranna. For what it’s worth, the company is rumored to be debuting two new models this year, and we’re just as excited to find out what it is as you are. 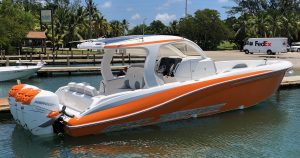 Miami is Deep Impact’s hometown. The builder of go-fast center console vees is planning to display a 399 Sport powered by quad 450R outboards, and one 369 Sport with triple 350s. “We will be doing sea trials by appointment,” according to sales manager Tim Gallagher.

HCB Center Console Yachts will have three “sea trial” models on the water at Miami Marine Stadium: the 39 Special (with triple F350 Yamaha outboards), the 42 Siesta and the 53 Sueños (with quad Yamaha 425 outboards). In addition, five additional versions of those models will be featured at the Miami Yacht Show.

The Calverton, NY, muscleboat builder says it’ll be showing a 29 Shotgun (with twin Mercury Racing 400R outboards) and a 39 Shotgun (with triple 450Rs) this year. The 29 Shotgun is an all-new boat for Hustler; last year, the 29 Rockit was the smaller of the two boats they had on display.

The Washington, NC, builder of Fountain and Donzi brands will be displaying the following boats at its on-water display:

At press time, the Wentzville, MO-based builder of performance catamarans and luxury center console vee hulls was planning to show off the following models in Miami:

• Two 390X catamarans, one of which is being delivered to longtime MTI customer Jake Nossaman.

• MTI will also be delivering a 48 Pleasure catamaran to customer John Caldwell at the show; it’s powered by Mercury Racing 1350/1100 engines.

John Cosker, president of the DeLand, FL, builder of performance catamarans and center-console vees, will be brining the following models:

In addition, Mystic will be unveiling a brand-new outboard catamaran. Details to follow!

Rhode Island’s Outerlimits always has a can’t-miss exhibit in Miami. For 2020, the boys are showing off an SL44 vee, the first to be built with Mercury Racing’s naturally aspirated, 9.0-liter 860 stern drives. “We’re pretty excited about this package,” says sales manager Dan Kleitz. “It should be a perfect setup for our 43 and 44.” The boat is owned by Cass Shewbart of Texas (his second Outerlimits after his famous 47 GTX, XXX: Disturbing the Peace. The SL44 features a unique center entrance cabin layout with separate driver and passenger bolsters. At the time of this writing, Outerlimits was also working feverishly to try to bring a new 46’ carbon canopy cat powered by MR 1550 engines.

Performance Boat Center, the Lake of the Ozarks-based mega-dealer, will be featuring two boats from the builder of luxury performance center consoles:

Both boats will feature new interior styling, according to PBC’s Brett Manire. “We did a relaunch of the 32 CCX in Fort Lauderdale with a few changes, and liked them so much that we made the same interior changes to the 40 CCX. The boat is now way more functional, with high quality and cutting edge features,” he says.

MIAMI SHOW: The Best of the New Stuff