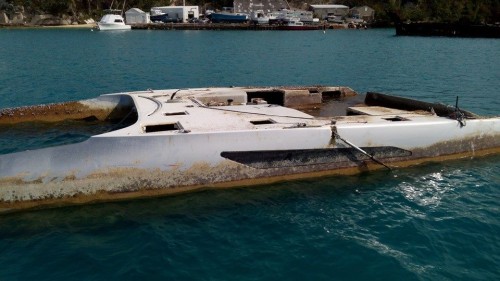 That’s how long the Gunboat 55 Rainmaker was adrift and abandoned in the Atlantic before being found by members of Oracle Team USA while on a fishing trip. The 55-foot Gunboat was spotted with the hull fully intact and according to Gunboat founder Peter Johnstone, she was hauled in shortly after by the 40-foot Luhrs fishing boat, Tenacious.

“The Gunboat 55 Rainmaker is still in one piece and floating,” Johnstone said on his Facebook page. “Found and apparently under tow [after] 14 months in the North Atlantic. Two winters of gales. That is a will to live on.”

According to Johnstone the boat has been spotted by several people over the past months. “The boat’s tending to itself, even though the crew jumped off, through one of the worst winters on record in the North Atlantic,” he said

It’s longevity is a testament to its design and construction as composite experts say they can’t think of any other structure that would be able to survive intact and afloat for that amount of time under the such stress.

However, the company is still flailing and currently under Chapter 11 restructuring after taking a nose dive due majorly in part to a high profile demasting in 2015.

The boat made news when the Coast Guard rescued millionaire Pinterest investor Brian Cohen, his son and three crewmembers from the $2.5 million boat when its mast broke in heavy winds and high seas about 400 miles off the coast of North Carolina.

We’ll keep you updated with what happens to the company next!