As reported in Powerboat Nation last month, World Champion offshore driver/throttleman Gary Ballough took delivery of his brand-new 32′ Victory raceboat he plans to campaign during the 2019 season. Today, Ballough and racer John Tomlinson of TNT Custom Marine took the boat out on the Atlantic Ocean in Miami for some preliminary testing.

Like his previous hull, a 32′ Doug Wright, the Victory will be campaigned as FJ Propeller (an abbreviation of Frank & Jimmie’s, the Fort Lauderdale, FL-based propeller shop).

“It was quite a ride,” Ballough told Powerboat Nation. “It’s been a long road, waiting for the boat to get here. It just got done being rigged. So we took it out and shook it down a little bit. We had a good time with it. It was a long time coming.”

The all-carbon-fiber 32′ was shipped from Dubai to Jacksonville, FL. After delivery, Ballough took it to TNT Custom Marine (North Miami, FL) in late March to have it rigged and powered by twin Mercury Racing 300XS Optimax outboards, the required powerplant for his offshore class, Super Stock.

Both Ballough and Tomlinson “thought it was awesome. We were both pretty impressed with it,” he said. But today’s testing, he said, “wasn’t about speed today. We wanted to check everything out. Did the escape hatch hold water? Did it idle? Did it shift? Was it cooling correctly? Were the motor heights reasonable? This was the first time it was in the water, so it was a shakedown run. That’s where you make sure everything’s working. We’ll go do some further tests to see what it will do. But we were really impressed with it in the short amount of time that we went out in it.”

Ballough’s first race in the Victory will be at the kickoff OPA meet May 17-19 in Cocoa Beach, FL. The boat will be primarily driven by Jimmie Harrison and throttled by Ballough. 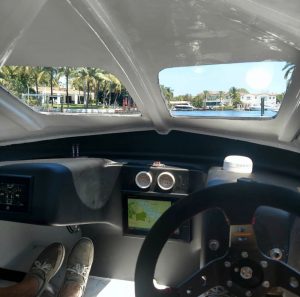 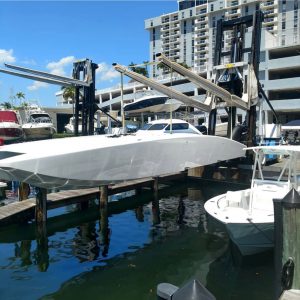 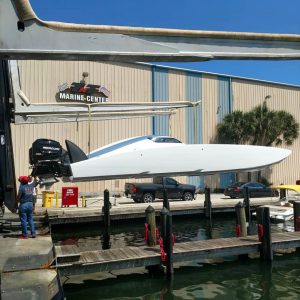