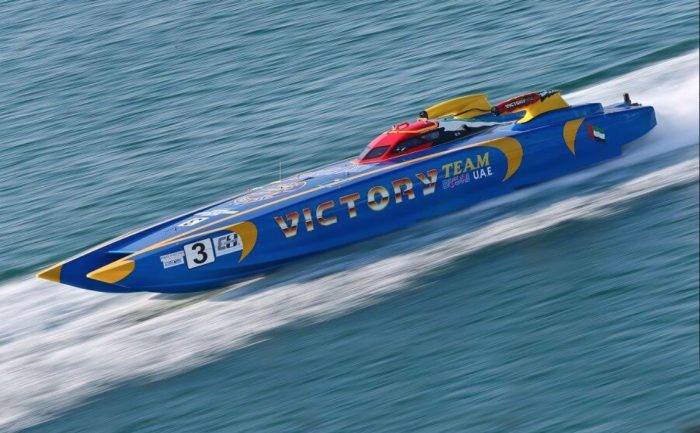 Dubai’s Victory Team has ensured a strong and fruitful two-boat, four-driver debut as it marks its trans-Atlantic foray at this week’s Super Boat International (SBI) race in Clearwater, Florida, as well as the Key West World Championships, to be held Nov. 4-11.

Held for more than three decades, SBI’s World Championship event is one of the most challenging races for dual-engine powerboats. And with just two operative rules—boat length must be from 40 to 50 feet, with engine power matching or exceeding 2,200 hp—the Victory Team decided to send two boats for the annual competition.

HE Huraiz Bin Huraiz, Chairman of the Board of Directors at Victory Team, spelled out the motives behind the team’s first-time participation in Clearwater. “First, we need to know where we stand in the tough and demanding world of powerboat racing. The Victory Team has been world champions in Class One powerboating on several occasions, but we felt that we needed to step it up and step out of our comfort zone and see where we stand in a totally different setup,” Huraiz told media before the team left for the United States earlier this week.

“No doubt this is a challenge that we feel we can face up to, especially given the talent pool of home-bred drivers and crew. Our leadership has always been clear on accepting bigger challenges and we feel that with our participation in Clearwater Dubai will have yet another unique opportunity to shine on a truly world stage,” he added.

The Victory Team has already shipped two of its best Class One boats across to Clearwater, along with their mechanical crew. The team will first compete in the final round of the national championship this weekend (Sept. 28-30), followed by the season finale in November.

“Now is the time for the men in blue to set foot on distant lands along with their dreams. I am confident that our drivers and crew will be up to the challenge of contesting for the title among the best drivers and boats in the world,” Huraiz said.

RACING to the weekend! Is it just us, or did this

Things I'm thankful for: a day on the water with t