DCB Performance Boats invited its customers to its 2018 Regatta on Sept. 21-22, and it was a typically festive, well-attended event teeming with some of the wildest West Coast muscleboats around.

Company President Jeff Johnston called the turnout “fantastic,” saying that he was pleasantly surprised when the anticipated 55 boats turned into 73 entries.

“We had great weather and a great venue,” Johnston told Powerboat Nation. “W e moved to the London Bridge Resort to see what it would be like, and the reception seemed just great. The resort was very hospitable, and everybody liked the layout and the dock arrangement.”

DCB augmented the resort’s dock layout by adding two extension docks to help accommodate the large influx of guests. “I think we were able to park over 50 boats instead of 25, so it really enabled us to have more people in the dock space. We don’t like to play favorites.”

At the regatta, DCB delivered a brand-new M31 Widebody powered by a pair of Mercury Racing 1100 engines to a third-time DCB owner from Rancho Santa Fe, CA—making him the “shoe-in” for the event’s Newest Boat award.

The boat’s top speed? That’s a mystery for now, but the smart money is on 150+ mph. Retail price with all upgrades and options works out to about $710K, according to DCB.

Meanwhile, the Oldest Boat award went to a DCB 22′ Extreme owned by regular regatta attendee Chuck Foley that dates back to 1997.) The customer’s family flew out Friday evening and then they did the poker run on Saturday.

Johnston reports that business at DCB continues to be “terrific,” with boat orders extending out beyond the next year. One of the builder’s current projects is the new M44 powered by Mercury Racing 1550 engines for longtime DCB customer Dave Magoo, who currently owns and operates the M35 Bananas. “That’s going to be a real attention-getter,” Johnson says, adding that the new boat is currently in the gelcoat phase.

“It’ll be the same colors as Bananas—I don’t know if the boat will be called Bananas Too, but it’s bright yellow with black trim and some charcoal. It’s beautiful.” 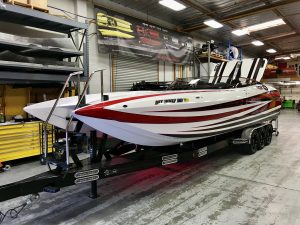 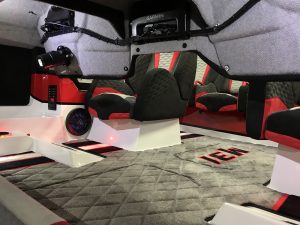 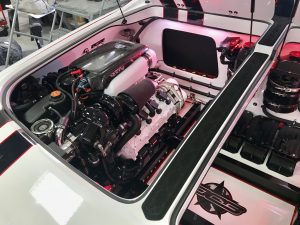 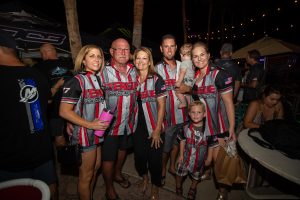 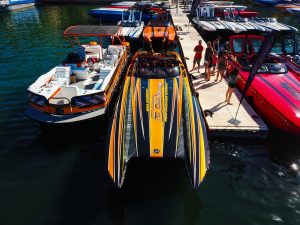 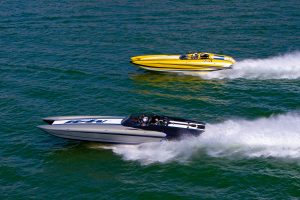 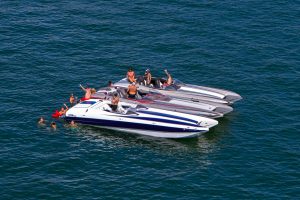