The Virginia-based speed fanatic, who has a home in South Florida and has owned numerous boats, took delivery of the MTI last week at Haulover Marine Center in Miami. Since then, Hendrick says he hasn’t missed a single opportunity to take it out on the water. In fact, he’s been so enthusiastic about the boat that has has been emailing and texting MTI owner Randy Scism repeatedly to tell him how much he loves the boat.

Before becoming one of auto racing’s biggest and most successful owners—he was inducted into the NASCAR Hall of Fame in 2017—Hendrick got his start in drag-boat racing. He campaigned boats and was a regular fixture on the APBA boat-racing circuit in the 1980s. He is fondly remembered for having campaigned Nitro Fever, a Top Fuel Hydro drag racer driven by Jimmy Wright (who once set a record of 222 mph in the boat) as well as piloting his own hydro known as Preparation H. 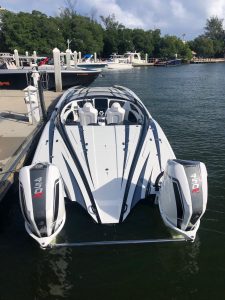 Hendrick ultimately traded a career on the liquid quarter mile for the one on the asphalt, but he never completely lost his appetite for the water. Quite the contrary: he has owned a plethora of Yellowfin fishing boats, and in 1987 purchased his first Wellcraft Scarab, and still owns a Scarab today. He has also owned other performance boats, including a 33’ Skater in the mid-1990s that was rigged by former offshore racer Bobby Moore.

More recently, Hendrick got interested in the MTI line when a friend who owned a 52-footer put it up for sale.

“I was actually looking at buying that boat,” he says. “Then I saw a picture of the MTI 340X and thought, man, those Mercury engines are bulletproof! So I ordered one.” Today (Monday, Jan. 6) he has been tooling around in the Florida Keys.

His review of the boat, to say the least, has been overwhelmingly positive. “I’ll tell you what,” he says, “I can’t tell you how many boats I’ve had, but it’s a bunch—every kind of boat that’s ever been built—jets, hydros, drag boats, circle race boats, center consoles, vee-bottom offshore race boats—and I’ve never had a boat that I liked as much as this boat. The quality of the ride is amazing. I just love it. I haven’t had it for two weeks and I’ve driven it every day I can get in it. I don’t just like it. I love it!”

So much, he says, that he’s already thinking about buying another one to run in his home state of Virginia.
Hendrick is the owner of Hendrick Automotive Group, a dealership network with 94 locations across 14 of the United States. 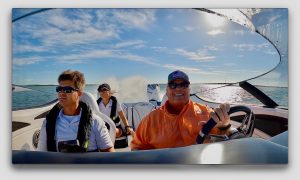 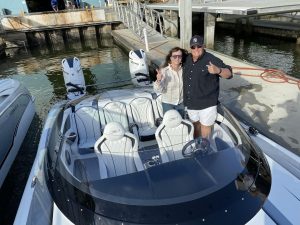 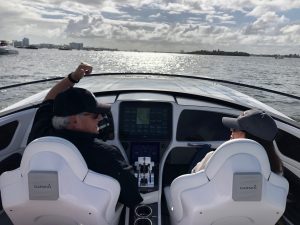 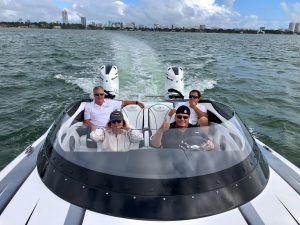 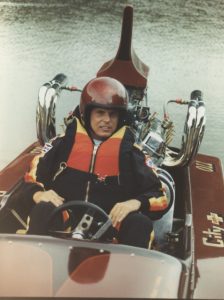 Above and below: Hendrick piloting his Preparation H hydro for the APBA circuit in the 1980s. 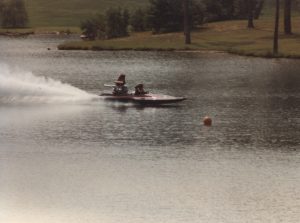