With the 2018 OPA World Championships in the books, racers have gone back to home, and some back to work—at least until the holiday. After a weekend of hard-earned victories, Powerboat Nation reached out to some of the winners to get their perspective on how the event measured up.

Nick Scafidi came to Englewood, FL, after having experienced a whirlwind of emotions at the SBI Offshore World Championships in Key West only a week before. Scafidi, owner/throttleman Shadow Pirate, came to defend his World Championship in Superboat Stock class with Marc Granet, and seemed on track to win it with back-to-back victories on Wednesday and Friday. But the title ended up going to Sunday’s winner, CR Racing. Things went better in Englewood, though, as the Pirate clinched the race and the World Championship in OPA Superstock class with driver Scott Porta. We asked Scafidi to speak about both events and his competition.

“It went great. We had four boats in the field. I was hoping some other boats would show up, but I guess some people had other commitments. I was disappointed that FJ Propeller didn’t show up, being a local team and everything. I think I kind of proved a point in Key West when I won the first two races with relative ease. I will say that it was a pleasure seeing Team Allen Lawn Care do so well on Sunday, and seeing their boat come alive, and their team molding into something.” 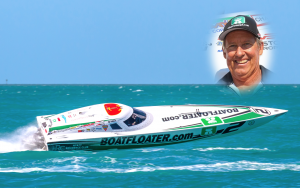 The father-son team of Steve and Stephen Kildahl, racing the 29’ Extreme Boatfloater.com, was another example of a pair of racers who saw the SBI World Championship slip away from them—but then roared back to life with an OPA World Title in Super Vee Light class. The team had finished the SBI season with third place in Key West, then charged hard to earn the trophy in Englewood. We spoke to Steve, the throttleman/dad part of Boatfloater, about the two weeks’ worth of racing.

“It was a lot of fun! It’s always fun winning with your son, there’s no doubt about it. We made some good choices on Sunday for propeller selection and weight distribution, and the setup was perfect. Competing against  Steve Miklos in Sun Print, as well as Brit Lilly in LSB Hurricane of Awesomeness, is always tough. We’ve raced against them for years. Our boat and Brit’s are pretty close, and it seems like we go back and forth all the time. I know that Steve has been doing a lot of bottom work to his boat, and he’s got it running pretty good. On Saturday, we caught caught in some lap traffic with some of the other classes running, and we were making up ground a little bit, but ultimately, I just said, ‘let’s just run our race. There’s always tomorrow.’ ” (Indeed—on Sunday, Boatfloater.com jumped out in front early in the second race of the day and managed to finish in first place.)

On piloting the boat with his son, Stephen: “It’s awesome. We’ve been together about 12 years now, and there’s usually not a lot of talk in the cockpit. We pretty much know each other. If there’s a challenging turn, he’ll say, ‘Dad, if you’d slow down, I could turn the boat.’ Luckily, on Sunday, the turns were all excellent. It makes such a difference to be the first boat, and not to get caught in everybody’s wakes. To negotiate the turns, it makes all the difference.” 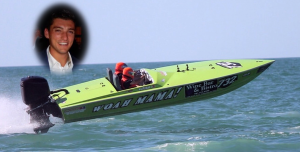 Another father/son duo was the team of Joe Reilly and son Joe Reilly Jr. of Long Island, NY. They are the World Champions in Class 7, which is limited to a maximum 300 hp and bracketed to 60 mph. Driving their 22’ Redline Woah Mama, the pair triumphed over Punisher on both Saturday and Sunday to take the title in the class. Now 23, Joe Jr. has been racing since he was 17; his dad launched his own racing career in the 1980s under the auspices of APBA. Together the duo claimed the World Championship last year, successfully defended the title last weekend, and also claimed the Gieco triple crown. We asked Joe Jr., a great enthusiast of Class 7, about his experiences in Englewood.

“Class 7 is an affordable, entry-level class, and not crazily expensive. It’s my passion. I wouldn’t trade it for the world. Honestly, OPA is probably the best organization I could have personally ever gotten involved in. It’s a family-style organization; they are very welcoming. It’s almost like a giant family. If anybody needs anything, all the teams are willing to help out and get things done. We help each other work on motors—anything it takes to get the boat out there, because we all like going out there.”

Joe Jr. also happens to be good friends with Nick Scafidi of Superstock class. He tells this story about Scafidi to illustrate the camaraderie within OPA:

“I had just gotten an engine built for the boat prior to Englewood. I came down to Florida and was testing on Friday, testing before the race and breaking in the 250XS outboard motor…when it went KABOOM! The fresh powerhead blew up. So I was sitting in the pits, feeling very discouraged. Then Nick drove by on his way to the boat parade. He stopped and said ‘Hey, how are you?’ I said I was OK. He said, ‘What’s wrong?’ I told him I’d blown the powerhead. Without any hesitation, he told me to look in the back of his truck. I saw a powerhead back there! He says, ‘Let’s go. Stop wasting time. Take the powerhead out, put it on your boat. When I get back from the parade, I’ll help you rig it.’ I didn’t feel like I should take it. He said, ‘Don’t embarrass me. I want you to take it. This is what I like to do.’ That’s why I say I think this organization is like a family. Sure enough, I won both races on Saturday and Sunday.”