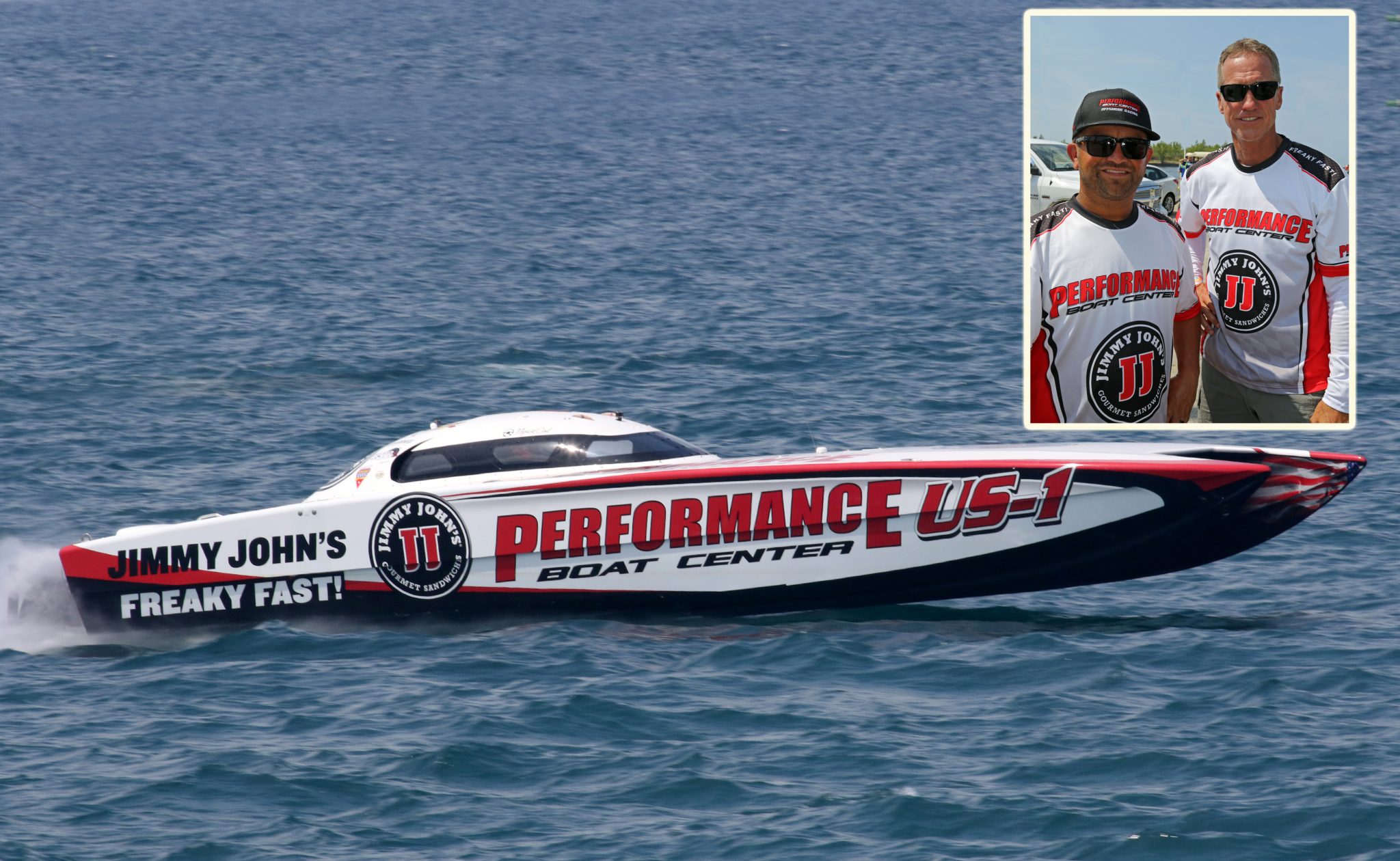 Members of the Performance Boat Center team recently traveled to the Marine Technology Inc. (MTI) factory in Green Bay, WI, with company founder Randy Scism to observe the ongoing construction of their new race boat (to be powered by 750 engines from Sterling Performance).

The MTI will act as the team’s new Super Cat class competitor on the OPA offshore circuit in 2019, and the swap from their Skater reflects a shift in the dealer’s brand lineup as well. “I know they’re excited to ‘race what they sell,’” as Scism puts it.

PBC co-owner Brett Manire, driver Myrick Coil and crew chief Greg Hillmer joined Scism to check out the all-carbon fiber construction MTI, which is a shortened (to 43’) and narrowed (to a 66” tunnel width) version of the builder’s 48’. The hull will next travel to MTI’s facility in Wentzville, MO, where its windshield and fuel tanks will be installed. “There’s a lot of things that need to be done to make it different,” explains Coil.

For one thing, it’s a big boat—bigger than the 38′ Skater the team has gotten comfortable in, and moving into a larger boat has definitely resulted in some stomach butterflies, “not knowing if this big boat’s going to work,” Coil says. But being out of the comfort zone is one of the things that makes the 2019 season exciting for Performance Boat Center. “It’s exciting, because it’s going to be different,” he says. “I’ll be looking forward to racing in the rougher waters, having this bigger boat.”

The trip to Green Bay was enlightening, not just because it gave the PBC entourage more than merely a chance to witness the creation of their boat. “We wanted to see their facility, because I’ve never been there,” Coil says. “It’s a very clean, very well maintained shop that was impressive. It’s extremely organized there, especially when you consider that their 42’ center-console vee had like 70+ molds.”

In addition to their new MTI race boat, Performance Boat Center is also eagerly anticipating the arrival of the first Wright Performance 420 model, the second collaboration between PBC and Doug Wright. The new 420 follows on the heels of the successful launch of the 360 outboard-powered catamaran; the first hull out of the mold is expected to be displayed at February’s Miami International Boat Show. “February is going to be a busy month for us,” Coil chuckles.

Meanwhile, the Skater is for sale, and PBC has fielded a number of inquiries about it. “Some people have expressed interest in converting it to a canopied pleasure boat with 1100s; others are interested in keeping it a raceboat.” To that end, PBC has a pretty simple sales pitch—over the past three years, it has accumulated two World Championships and three National Titles. It’s a proven winner, and chances are excellent that we’ll be hearing about a team who wants to step up and capitalize on its successes.