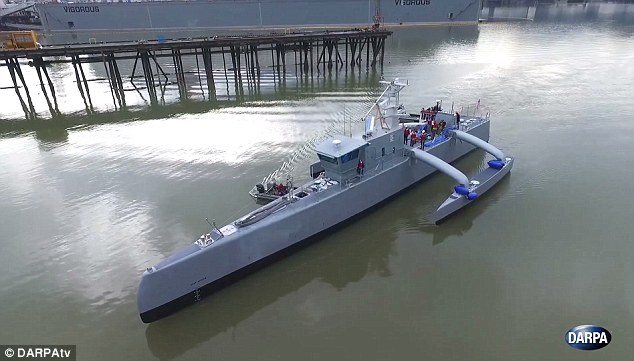 It’s time to challenge the ever growing threat that lurks off our coasts. The U.S. Navy is now testing the “Sea Hunter”, a radical drone boat who’s sole purpose will be to scour the seas for enemy submarines, many of which are quiet diesel powered vessels that can slip uncomfortably close to shore.

The 132 foot long ship, officially named “The Anti-Submarine Warfare Continuous Trail Unmanned Vessel” is currently undergoing its first high sped tests. It recently reached a top speed of 27 knots (31 mph) during testing in Portland, and the vessel is scheduled to be christened on April 7th, 2016 with open water testing planned for the summer off the California coast.

Darpa director Dr. Arati Prabhakar and deputy director Dr. Steve Walker revealed the craft earlier this year. “Imagine an unmanned surface vessel following all the laws of the sea on its own,’ Walker told media, ‘and operating with manned surface and unmanned underwater vehicles. The robot boats will go to sea for us to three months at a time.”

These autonomous boats will go out to sea for three months at a time which will be invaluable in the fight against enemy surveillance as well as prevent any first strike scenarios.