El Cajon, CA-based DCB Custom Boats has just delivered a brand-new M33R Widebody to repeat customer Brad Benson of Lake Havasu City, AZ. It’s his third DCB in a series that started with a pre-owned Mach 26 with I/O power, followed by an M29 pushed by a pair of Mercury Racing 400s purchased from Shogren Performance Marine. The M33 is a light layup hull weighing only about 5,500 lbs., according to DCB Sales Manager Tony Chiaramonte.
Even by DCB’s exemplary standards, the M33R is a work of consummate quality and craftsmanship, as is evident from the photos of this exceptional thoroughbred. By his own admission, when he purchased his M29, Benson—who works as a pump mechanic—was already planning on trading up to a more luxurious model, and had been keeping close tabs on the creation of the first M33R for some time. DCB General Manager Paul Miller had been sending a steady stream of photos of the rig’s creation to Benson. “He kept me abreast of their progress, and once it was done, Tony let me know that it was in the water if I wanted to come take it for a drive.”
That was all it took. “I was just hooked,” Benson says. “The way this boat rolls over—there IS no rollover. You just put it in gear, give it a little juice, and it’s going. That probably was the biggest selling point for me. And then there’s the way the boat turns—it’s just ridiculous how nicely it turns.”
DCB loaded up Benson’s M33 with an impressive array of special features, including:
• C-Zone digital switches on the popular touch-screen GPSMAP 8212 from Garmin, an electronic option that eliminates the need for toggles or a switch panel.
• A unique gelcoat scheme that Benson helped to design.
• Upgraded stereo, extra battery and three 12” monitors.
• Screens on the backs of the driver and passenger headrests.
• An Extreme tandem-axle trailer.
• Upgraded Paragon brackets.
The M33R is the culmination of a fascinating journey Benson has had with go-fast boats. He recalls the beginning of that journey with enormous joy, having hand-built a wooden Dory kit boat when he was 13 with his stepfather and brother. It took about four years to build, and was powered by a 160 Volvo Penta engine. This was the “seed” that germinated into a life of fun and speed.
After moving from Vancouver to California, he purchased a 1963 Chris Craft, which he spent about three years restoring. After another seven years, he bought a Caliber One jetboat with a 454 for power: “We ran that on the river for about five years before I saw and totally fell in love with the 22 Eliminator Daytona. The Caliber One was traded for a 1993 Daytona, which was equipped with a 502 engine. “We enjoyed the heck out of that boat,” he says. “It was a rock-solid boat By the time I sold that boat, I’d put about 800 hours on it.”
Eventually, Benson and his family outgrew the river, and relocated to Havasu in about 1996. It was then that he purchased his DCB Mach 26, and a new chapter of his boating career was launched. By the time Benson had become a loyal DCB customer, he had owned vees and cats, and boats powered by jets, I/Os and outboards. It has been, if anything, an amazingly versatile journey, and he predicts he’ll probably stick with the M33 for the foreseeable future.
“The DCB is like a Porsche/Ferrari on the water,” he says. “But that’s only part of it. Having a solid relationship with the DCB team has been part of what has kept me buying their boats. Their service is absolutely stunning, and they’ve done a truly phenomenal job with their communication, and working with us to get everything that we desired to have in a boat like this. I’m a bit of a techie, and they really paid attention to that. They ended up doing some pretty trick things on this boat.” 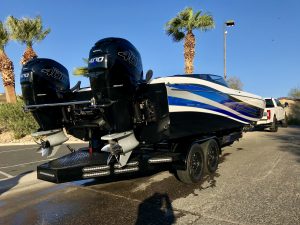 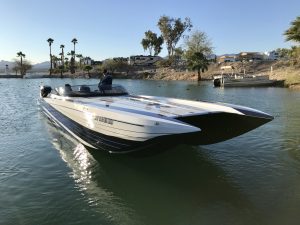 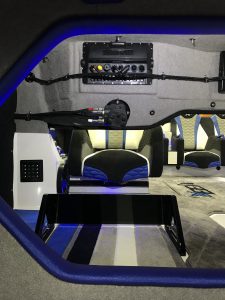 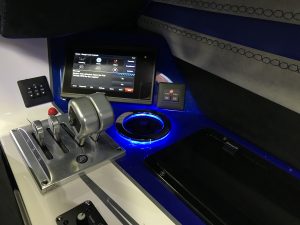 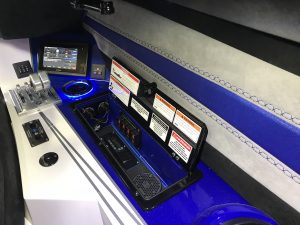 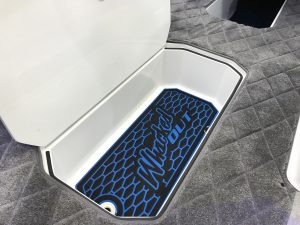 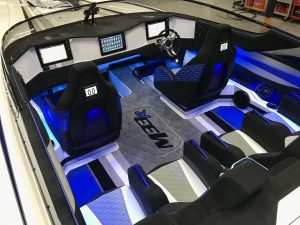 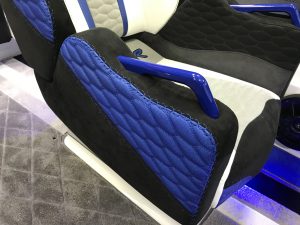 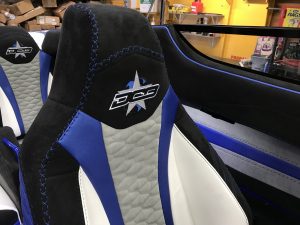