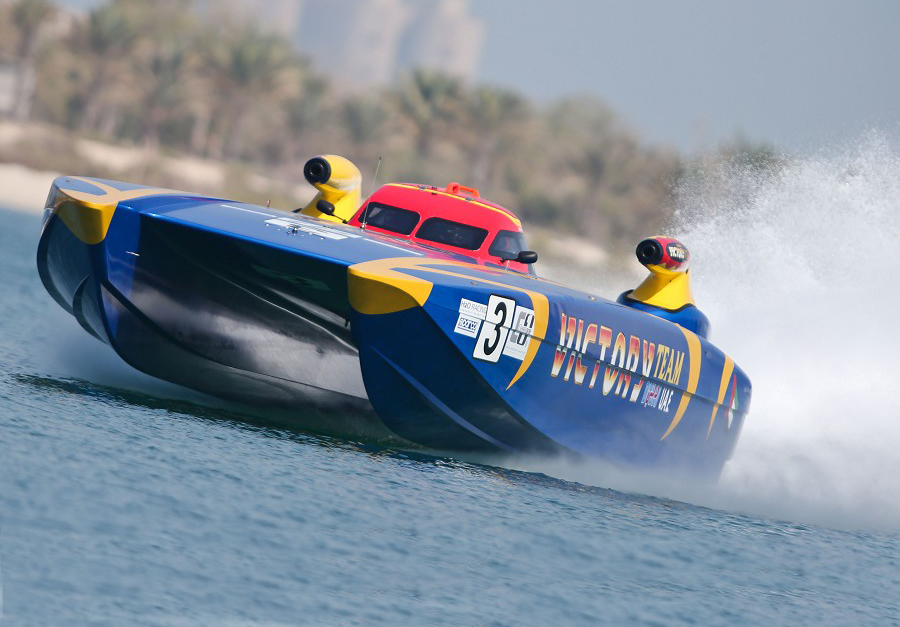 American offshore race teams are about to experience a bonafide shakeup when two champion raceboats from the United Arab Emirates join the Superboat International (SBI) fleet for the upcoming races in Clearwater and Key West, FL.

The two events, which comprise the National and World Championship races, will feature the Victory offshore team from the UAE, which participate—and often win—XCAT circuit racing around the world, running in Class 1. The 10th Annual Hooters Clearwater Super Boat National Championship will be held Sept. 28-30, followed by the Key West World Championships, Nov. 4-11. The Victory Team is sending two of its signature blue boats: a 42-foot Victory driven by Salem Al Adidi, and a 40’ Victory with Eissa Al Ali at the throttles. Both boats are owned by the government of Dubai, with Luciano Barbati as the Class 1 team manager.

Although both men have raced around the world—from Switzerland and Australia to China—this will mark the first time either have raced in the USA.

Formed in 1986, the Victory Team has scored more than 24 world championships and clinched 590 awards during its racing journey. The team, which participates in Class 1, Formula 1, Formula 2 and Formula 4 classes, is truly passionate about racing, speed, and excitement. Last season, Victory captured the XCAT World Championships and were awarded the title in Monaco for best sporting performance.

In Key West, Salem Al Adidi—who coincidentally was born the same year that the Victory team was formed—and his nephew, Eissa Al Ali, will each pair off with Superboat Unlimited racers. Al Adidi will team up with John Tomlinson (of Performance Boat Center/Jimmy John’s), while Eissa Al Ali will pilot the other Victory hull with Steve Curtis (of Miss Geico Racing). Tomlinson will pull double-duty in Key West, throttling for driver Myrick Coil in Superboat Class, while Miss Geico is not slated to race in Key West this year. In Clearwater, FJ Propeller multi-World Champion Gary Ballough will race with Al Ali.

Al Adidi told Powerboat Nation that one of the keys to the Victory’s successes has been the determined yet fun-loving spirit of his team’s working relationship. “We have a good team, and there is rarely any pressure,” he says. “We are in this sport because we enjoy it and because it is fun. That’s the reason we’re always a world champion. Stress leads to making mistakes and losing. That’s why our crew members are always encouraging and saying, ‘Good job guys. Don’t worry. That’s normal.’ We look at it this way: Finishing a race is more important than thinking that you have to win this race.”

Al Adidi’s interest in ocean-going sports developed at a young age. “When I was 10 years old, my father took me to the beach and we would watch the powerboat races,” he recalls. “He was a fisherman and a sailor, and I would join him at sea. Growing up, I became active in the traditional sport of dhow sailing. So that was my start, and from an early age, my dream was to race in a powerboat.”

The added competition from Dubai is rumored to be an overture for several international race teams joining Superboat racing in 2019. Nothing is yet written in stone, but officials are negotiating behind the scenes to attempt a unique joining of forces between several overseas muscleboats to participate in the 2019 Superboat season.

Powerboat Nation wishes the Victory team the best of luck!