Schwartz is a repeat MTI customer, having previously owned one of their standard 340X models. “It was my first cat,” he told Powerboat Nation at the Lauderdale show dock. “Tim Gallagher and Randy Scism taught me how to drive it, and I did a couple of fun runs with them. It was a great boat, but I trade them fairly often,” he chuckles, looking at his 34X Special Edition. “They built this beauty, so I had to have it.”

Both models are carbon boats powered by Mercury Racing 400 outboards, but in creating the SE version, Schwartz visited the MTI factory to help add his personal touches. The results include a revised and unique cockpit, extraordinary paint job, upgraded interior featuring Alcantara fabric, additional storage areas, enlarged GPS system and a wrapped and reconfigured dashboard. “Everything is different from the prior 34s,” Schwartz says. “We all collaborated in and made it a truly Special Edition.”

MTI Sales & Marketing guru Tim Gallagher told Powerboat Nation that this new addition to the company’s catamaran lineup was “something we’d been working on for a while, and the first one is here in Fort Lauderdale,” he says. “A lot of this boat was customer driven—we listen to what our customers want, and what their preferences are, and change our product as we go.”

Since he trades boats fairly often, is Schwartz already thinking about his next boat? “I’d like to get a 42 to match this one,” he says. “Owning both would be the ultimate dream.”

Prior to the MTIs, Schwartz owned some Cigarette hulls, including a 39 Top Gun powered by Mercury Racing 700s that he purchased from Gallagher back when he worked for the company. “I had that one for three years, which is a long time for me,” Schwartz says.

In addition to the new catamaran, MTI is also showcasing two of its deep-vee center console models: the MTI-V42 and the brand-new MTI-V57 XSF. The latter display boat is the first to receive a “gap tower,” a sizable fishing tower with an upstairs “buggy top” that extends a full 28 feet off the water. Coincidentally, the 57′ was built for another repeat MTI customer. Previously the owner of a 42′, he’d fished the boat pretty hard, according to Gallagher. “Then, once we kicked out our first 57′, his wheels started to turn—he started dreaming of trading up to a 57′. Now here we are with our big open 57′ with a big tower, and we’ve got him fishing on his big boat.” 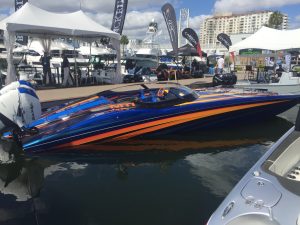