The Motor Monkey starts the Poker Run season in Louisiana by sponsoring the Tickfaw 200, a premier fundraising event benefiting the Sheriff’s Department Marine Division. Known as Louisiana’s largest powerboat poker run, the course covers 200 nautical miles of Louisiana waterways, from Lake Pontchartrain to the scenic rivers, swamps and marshes of the state.

This highly anticipated event draws players and million dollar boats from across the country for a fun filled weekend of great food, music and partying, all for a good cause.  The three day event kicks off on May 3 at Blood River Landing in Springfield and the course spans across Southeast Louisiana covering stops from Livingston and Tangipahoa Parishes to the Northshore and New Orleans. 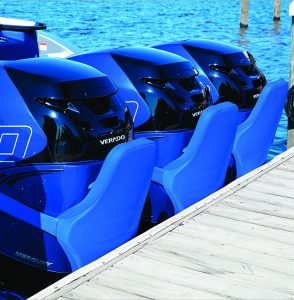 The Motor Monkey crew will have two of their boats participating in the event, the Sunsation 34 CCX, and  a 388 Skater, and will be featuring their premier, patent pending product, the Motor Monkey fender.  Making its debut at the 2018 Miami International Boat Show, the innovative fender design was initially developed to protect the Motor Monkey Team’s own outboard motors when docking stern to, rafting, and in close quarters that are common at events like the Tickfaw 200. Over years of development, the concept evolved to become a multifunctional fender that solves many of the issues boat owners face when docking and with limited storage concerns.

CEO, Kort Wittich, says that with the warmer weather and the boating season gearing up, Motor Monkey is showing great promise and has seen a steady increase of new customers and distribution partners from across the country.  The entire team is passionate about what they do and are currently working on their next development project which they say will be in line with the quality and functionality of the Motor Monkey.

If you’re heading to the Tickfaw 200, then be on the lookout for the Motor Monkeys and Kort’s Monkey Crew and Miss PBN Brittany and the Powerboat Nation crew on the 34 CCX Sunsation!