Home Powerboating News ‘Too Much’ MTI to Debut in OPA’s Cocoa Beach Race in Supercat...

There’s a brand-new competitor in offshore racing, but the boat he’ll be campaigning in tomorrow’s Cocoa Beach OPA competition isn’t new to racing at all.

Driver Chris Grant of Ontario, Canada, will be behind the wheel of the former MTI raceboat known as Warpaint; after purchasing it, the rig was overhauled by Double R Performance of Fort Myers, FL, and rechristened Too Much? The editors from Powerboat Nation were on the scene in Cocoa Beach to chat with Grant and his crew, which includes throttleman Ken Jensen and crew chief Mike Dilapo.

“A couple of years ago, I tried to get into an offshore boat, and it didn’t work out,” Grant says. “Then last fall, Ray Roberts of Double R Performance, who knew I was looking for one, told me about the Warpaint boat, and everything came together.” Formerly owned by Bob Vesper, the 42′ MTI has been off the race course for the last few years, but is now back, proudly displaying the Double R logo—as well as the logo of the Canadian ski resort that Grant owns, Antoine Mountain.

Grant, 58, is the owner of a 42′ Fountain Lightning that he uses in the Florida Powerboat Club’s poker runs to Key West and Fort Myers. But these days it’s the offshore cat that has been demanding much of his attention. So what’s it like going from a vee hull to a cat? Grant opts for a land-based vehicle analogy.

“The Fountain is like driving a pickup truck, the way it handles in a turn. It’s nice, but you could slide a bit,” he explains. “But with the cat, it’s like you’re driving a dually truck. You just carve into the corners. The acceleration is amazing; the cornering and the speed is just unbelievable.”

Grant has been preparing for the Cocoa Beach race by testing in Florida’s Cape Coral. “Ray and I have been doing corners and straightaways. It’s been amazing and super fun. We did have a water pump belt pop off, which smoked the engine. Within two weeks, we had new engines put in, tested it again, and now here we are!”

Too Much? joins some pretty tough competition this weekend, including WHM Motorsports, Pro-Floors, AHM Racing, MCON and others. 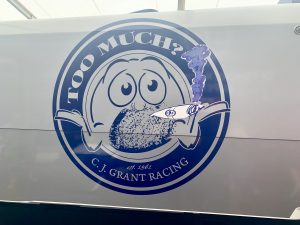 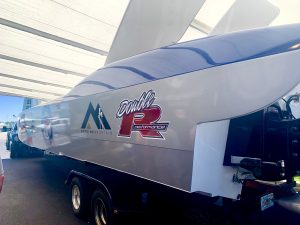